The past week and a half since I returned from Australia have been fairly busy, almost hectic some days. Phew!

Before I went away I had promised my cousins that I would make a birthday cake for their respective mothers (twins) who will be 80 on 5 November. There is to be a surprise celebration for them on that day, so a cake is almost compulsory. So as Bob and I are going to be away from Monday until 3 November I had to get on with it. Baked the cake before I went to Australia and on my return began making the sugar flowers for the decoration. As time will be of the essence when we return from our holiday I had asked a friend if she would ice the cake for me. So yesterday I took all the necessary to her and will collect the finished creation on our return. I should add here that my friend is 75 years old! She is also one of a twin.

Have also baked another birthday cake in readiness for decoration on my return. This time for a joint party for 3 sons of friends. Another set of twins, plus a sibling.

A friend telephoned on Tuesday to ask if we, together with another couple would like to go and have a meal with her and her husband on Wednesday evening. We haven't seen much of them recently because he has been undergoing chemotherapy in an attempt to get him into remission. But he is having a break from it for a while to give him a chance to build up again. They both felt that they would like a social evening and we were only to pleased to go. We had a lovely evening, just the six of us, good food,lots of laughs and our friends both said that it had done them a power of good. We wish there was more we could do but they do know that they only have to pick up the telephone and ask, should they need anything at all.

My darling girl also telephoned mid week, to ask if it would be OK if she and her little one visited at the weekend! Of course! Only a flying visit, overnight, but would like to see us before we jet off. So that was arranged and they duly arrived on Friday evening, leaving us exhausted 24 hours later. We invited my mum round to lunch on Saturday too.

And, as if all of this was not enough, the estate agent rang - could Mr and Mrs W view the house on Saturday morning please. This would be the 6th set of prospective buyers since we put the house on the "market" in early March. We have never taken so long to sell a house before, just shows how slow things are. However they duly arrived and had a good look around and left again. Are they interested? Who knows! I remarked at lunch that each viewing we have had had been on a sunny day, so just shows how few there have been!

So, today, I shall be packing for our holiday. Me and Bob. We are both really looking forward to it and will be away for 2 weeks.
Posted by Strawberry Jam Anne at 12:00 15 comments:

When my son and his family were emigrating to Australia they made the decision that their dog should go with them. He was then about 8 years old and they had chosen him from a rescue centre when he was about a year old. He was part of the family and they wouldn't leave him behind. In fact Moss was actually the first of them to arrive in Australia, having travelled on a separate flight, direct to Melbourne where he was to be quarantined for 30 days. On release from quarantine he was in wonderful condition but with no bark, obviously having to keep up with the other dogs in the kennels, but that soon returned once he was back with the family. 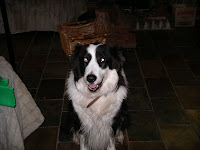 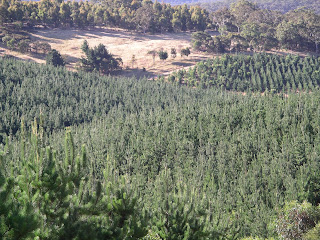 Whenever I visit them I usually go for some walks with my son and his dog and sometimes we go to Kuitpo Forest which is not too far from where they live.

We did just such a walk one evening while I was there this time. Moss likes to run on a little way ahead, soon catching us up if our route should take a different direction from the one he is moving in. Sometimes we see nothing on our walks, sometimes rabbits, maybe a kangaroo or two. That evening as we rounded into another path, a little way ahead of us were 7 or 8 kangaroos, right in the middle of the path. We slowed our pace and called to Moss to come to heel, which he eventually did and my son slipped the lead onto him. He doesn't usually chase after them now, but S wasn't taking any chances. Anyhow the kangaroos had spotted us and soon jumped out of our sight into the trees. A little further on we saw another but it soon disappeared also. In all the times I have been in that forest I have never seen so many together and so close. A little later on the walk S thought he heard something moving and we stopped still to listen. I heard nothing but S spotted an echidna, trundling its merry way through the undergrowth, oblivious of our presence. We left him to it.

I always feel privileged when I see animals in their natural habitat and was thrilled, though slightly irritated with myself as it was one of the few occasions that I hadn't bothered to carry my camera!

So, for anyone who is not sure what an echidna looks like, here is a photograph of one I took at Cleland Park. 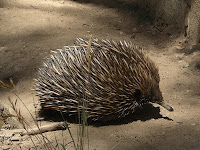 Apparently their young are called "puggles" - how sweet!

And here a photo of kangaroos taken on a walk through the same forest but on a previous holiday. Apologies for the quality of the image. 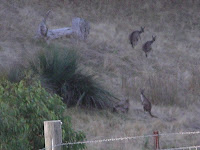 I really enjoy having these walks with my son, I think we both look forward to them - Moss definitely does!

Below is a photograph I took on one of our first walks in the forest. 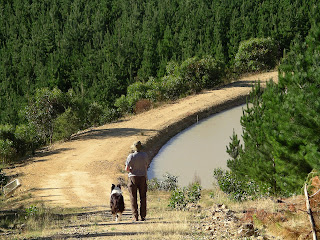 It is one of my favourites although I have very mixed feelings whenever I look at it.

I had to pop into our local town on Saturday morning to go to just one shop. I had already promised to take my mother to do her shopping so I asked Bob to drop me off, to pick up mother and take her to the supermarket and then drive back home. I would walk back home from the town, it would take me 20 minutes. Then I would drive to collect mother and help her to put her groceries away.

So I was dropped off at the chosen spot, did what I needed to and immediately made my way home - in 20 minutes.

But my question is this - Why did he think I may have a problem with a short walk from town when I had just completed a 10,000 mile journey across to the other side of the world with my elderly, disabled and sometimes difficult mother, and back again, on my own.

And if he really thought I wasn't capable of a 20 minutes stroll back from the shops, what was he thinking letting me travel 10,000 miles on my own in the first place????

He hadn't thought it through was his reply!!

Holiday (i) - Where do I begin

I said in my previous post that I would give edited highlights of the holiday - but where to start? I suppose that it should be with my beautiful grandchildren. So first of all a photo.

Matthew James, born on 2 September weighing 3.34 kilos, managed to lose half a kilo of his birth weight which, naturally, gave some cause for concern. He looked so frail when we first met him, his skin too big and his dear little arms and legs so skinny. But during our time there he began to regain his weight and started filling out. He now weighs 3.56 kilos, so is doing well and no longer needs to be monitored. Giving lots of smiles now too, though I wasn't able to catch one on camera.

The older children are very taken with him, have remarked that they don't get the attention they are used to, but they understand and in their way try to help and are affectionate towards him.

I took them out a few times, to the cinema, the park, shops etc and it was lovely to be able to spend quality time with them. They are very loving children and, of course, lovable. We had some fun.

Before the family left for Australia in 2004 I had been used to looking after Jacob, then aged three and a half, for at least one day each week, since he was about 4 months old. He was my first 'blood' grandchild and until recently the only grandson. He will always have a special place in my heart. Willow was only ten months old, and was very much a 'Mummy's girl', inasmuch that she would rarely have anything to do with anyone else. I am pleased to say that during each of my visits since their departure she and I have got to know one another and each time have become closer.

And here we are together.

Can you imagine how hard it it to say goodbye!

Well here I am, back again after my holiday.

Obviously the three week trip, with my 86 year old, partially disabled mother to visit family in Australia and meet my new grandson gives me plenty to write/blog about but I will just give edited highlights as and when they come to mind over the next few days. I may even throw in a photo or two.

We arrived back into Heathrow on Wednesday afternoon and dear old Bob was there to meet us. Because of mum's disability, (she can walk with a stick but only for very short distances) we have wheelchair assistance at the airports and this is such a boon. Once checked in we are helped every step of the way (so to speak)! Being first onto the plane and waiting until last to get off again makes life so much easier - no mad scrambles. We landed at 3.10 pm and were actually driving out of the car park at 3.50 pm and that included a comfort break for mum. Pretty good going I'd say. Bob was amazed to see us come through so quickly.

The weather was beautiful and by the time we arrived back home there was a stunning sunset. A wonderful welcome home.

So, Australian holiday over I now have to concentrate over the next 10 days on my twin aunts' surprise birthday cake (for the party on 5 November) and repacking my suitcase and Bob's for our trip to India on 20 October.

And I have missed being in touch with fellow bloggers so will catch up with your most recent missives as soon as I can.