Back to square one!

Hopes of selling our house fairly soon have been dashed.

I think I mentioned that the first couple who made a good offer are not yet in a position to proceed with the purchase as they have to sell their own property. The second couple, with whom negotiations were under way, came back for a second viewing and then withdrew their offer because they have decided they would like a larger, Victorian style house!

Sunrise from my window - and an ominous looking sky! 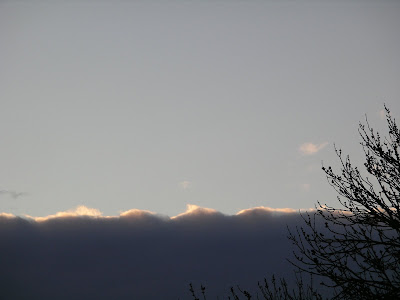 For other pictures of the skies around the world - please click here.
Posted by Strawberry Jam Anne at 19:29 11 comments:

I mentioned in my post prior to Easter that we had bought our grand-daughter a garden gnome instead of a load of chocolate. Well, he became the final prize in the Easter egg hunt which our daughter had planned. She (daughter) didn't have any idea what we had bought, the clue just said "What has Grand-dad got". (Grand-daughter can read simple words now). I had wrapped up the gnome, complete with his mini egg, in Easter paper. So, final clue and we all trooped upstairs to Grand-dad (OH) who was sat in bed reading the paper (well it was 7.15 in the morning). He asked her what it was all about and asked would she show him the eggs she had already collected. She patiently trotted downstairs and came back with a selection of 3 to show him. She finally got her prize and he helped her to tear off the paper.

To say she was thrilled is an understatement. She cuddled him close and when our daughter asked what his name would be, immediately replied "Percy". No hesitation. And then "after Percy the Park Keeper", adding "I'm going to put him outside my play-house". 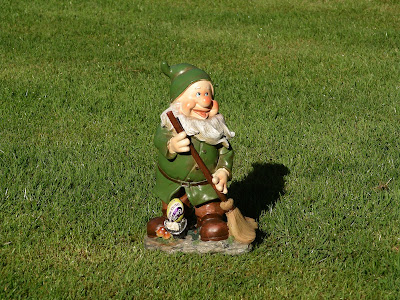 On her way out of the bedroom door she held Percy very tight (to keep him safe) and gave him a kiss.

For anyone who has not heard of "Percy the Park Keeper" it is a delightful TV programme for young children and is a firm favourite with at least 3 of our grandchildren.
Posted by Strawberry Jam Anne at 18:30 10 comments:

Pretty blue sky seen through the branches of our magnolia tree. 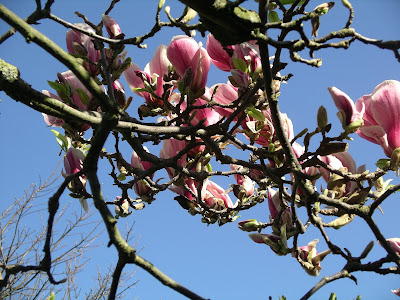 For more sky pictures from around the world - please click here
Posted by Strawberry Jam Anne at 06:33 9 comments:

We have had quite an eventful few days, since I last posted. Where do I begin?

Well, Thursday evening OH and I went out with some friends to a local restaurant to celebrate my 65th birthday. A lovely evening which got our weekend off to a great start. Friday - Good Friday - my birthday - I decided to just take it easy and in fact I was busy doing nothing all day. Did go round to see my mum for a while and the traffic was so heavy it put me off wanting to go anywhere else. So an easy day with various phone calls and visitors and OH cooked our evening meal.

Saturday morning brought two phone calls - one was our estate agent saying that an offer had been made on our house. Unfortunately the potential purchasers still have to sell their own property! Also there was another couple wanting to view our house on Tuesday afternoon. Spurred on by this OH and I later went into the agents to pick up some details of a possible future home. The second phone call was to tell me that I had won a prize in a local Easter raffle - a box of chocolates. Not so exciting but still good news.

Our daughter and 4 year old grand-daughter arrived on Saturday evening, so my Easter Sunday morning began with an Easter egg hunt - about 7 am! Later that morning D and GD went off to visit friends and I got on with cooking lunch for us all. My mum joined us and it was a lovely family occasion. Later in the afternoon D, GD and I walked to the beach.

Easter Monday morning D and GD and I went off to visit friends for coffee and then on to "Secret World" a local wildlife charity who were having one of their "open days". We saw quite a few rescued animals including badgers, owls, snakes and hedgehogs. They also have a baby otter there (which we didn't see) and many, many more different types of wildlife, many of which were still hospitalised and therefore kept away from the general public. Some of you may have heard of the incident where because of a remark made by Jonathan Ross on his chat show, about a dormouse at the centre, they were visited by the police to make sure that the said animal was not being ill-treated. (It was not - long story though, which Pauline Kidner, the lady who runs the centre, recounted with good humour). The next two rescued baby badgers were named Jonathan and Ross! Anyway, we spent a couple of hours there and then got back into the holiday traffic to make our way home for lunch. Because the weather was so beautiful we again walked to the beach later in the afernoon.

Tuesday dawned and we all scurried round making sure the house was tidy for our viewers. D and GD went off to visit my mum and then to have GD's hair trimmed. We met up in the town later for lunch with a mutual friend. I got myself back home for the viewing which seemed to go well. D and GD left for home on Tuesday evening and got safely home by 9 pm. She tends to travel in the evenings as the roads are quieter and little girl falls asleep and then just gets lifted from car to bed. A good plan which works well.

Yesterday, OH and I went off to have a look at a possible future home. Always a bit scary I feel but we were happy with what we saw. Later that day we had a call from the agents with another offer on our house. That is even more scary. So as I write negotiations are well under way and we may know later today if and when we are actually moving and to where!!

I was born on Easter Monday in 1944, so my birthday often falls around Easter time. This year it occurs on Good Friday.

My mother was confined at home, which was usual in 1944. It being a holiday, when my father was sent (on his bicycle) to fetch the nurse he found a note on her door explaining that she had gone out to tea and could be located at a certain address, which was about 4 miles away. So he set off again and found her, I assume with no problem. However, she had walked to her tea party so she borrowed my father's bike so that she could get back to her house more quickly to change into her uniform and collect her bag, before going on to my mother. Poor Dad had to walk back to her house then to reclaim his bicycle before he went back home. That was Easter Monday afternoon and I made my entrance at 10.35 that night.

So this birthday is my 65th. We are going to go out for a meal with friends on Thursday evening but I'm not sure what we will do on Friday - I think I'll just take the day as it comes and just relax.

Our daughter and grand-daughter are coming to stay for a few days arriving on Saturday evening. So this evening I have been preparing my Easter decorations which just consists of a few twigs of twisted willow hung with cardboard eggs and chicks and ribbon. GD will love it and it does look quite pretty. I took a photo of it but unfortunately it is a little blurred! 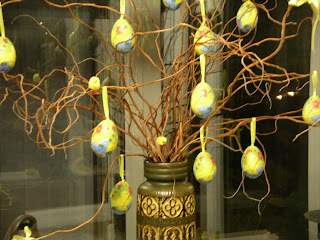 Tomorrow I will put some daffodils there as well.

I have also managed to find her an Easter bonnet but won't be loading her with chocolate eggs as I know she will be given plenty from other friends and family. She told me recently that she would like a gnome to sit outside her playhouse so we have bought her one and I will place a small chocolate egg between his feet and wrap it up. If the weather is kind we will do an egg hunt in the garden (if wet, in the house).

So we are set for quite a busy few days and on top of all that we have prospective purchasers coming to view the house Thursday afternoon.

Happy Easter everyone.
Posted by Strawberry Jam Anne at 22:50 19 comments:

In the garden this week

There is lots to see in the garden now and even though the daffodils are almost over there are plenty of other spring flowers appearing almost every day.


A bergenia and a few celandines 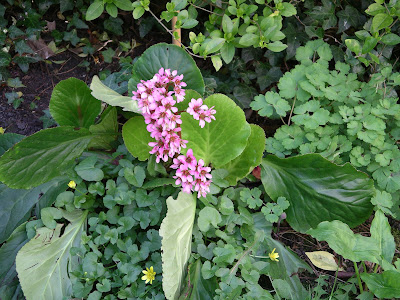 the camellia is fully out now 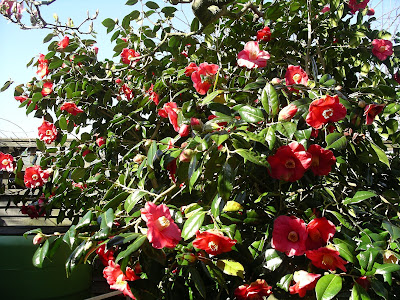 there are masses of violets 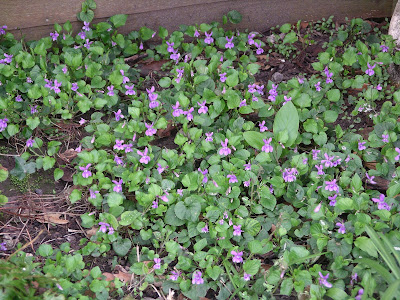 and some pretty cowslips 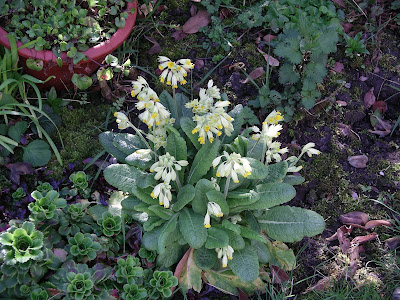 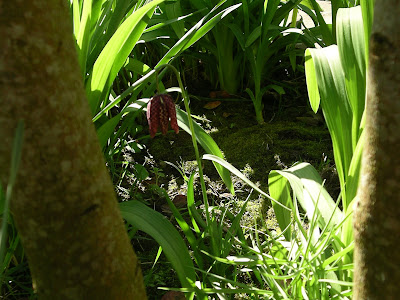 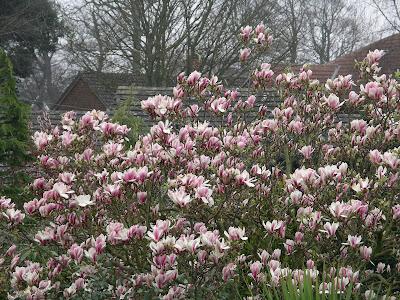 In the pond the tadpoles are growing fast 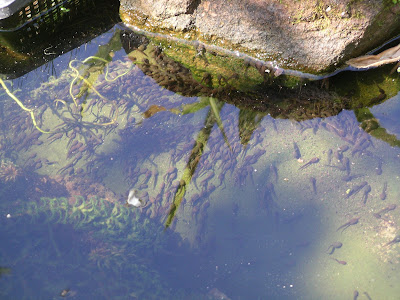 and so does the squirrel 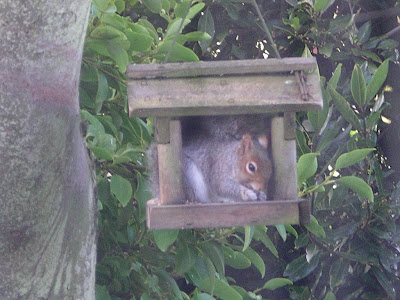 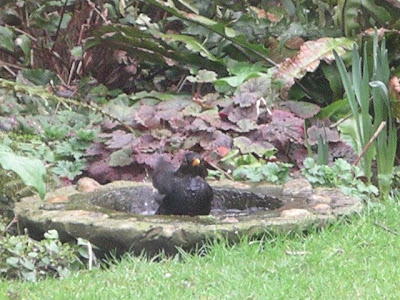 and who do you think this is having a bath? 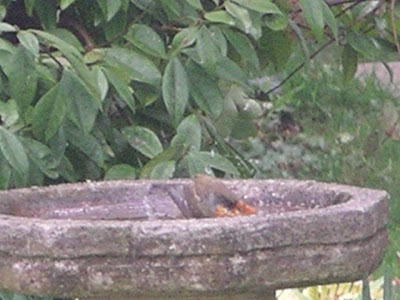 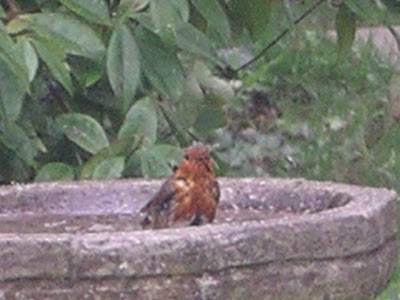 Robin had a good soak!


and later when we were in the garden we were able to hear him singing - lovely. 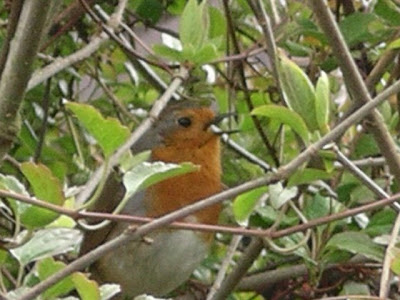 I haven't been blogging much lately for various reasons, one being that my computer is on a "go slow". It takes forever to do anything and trying to visit other blogs is a nightmare! Tomorrow I am going to try to resolve the matter and hopefully then will catch up with my blog world friends.

Watch this space!
Posted by Strawberry Jam Anne at 21:55 11 comments: 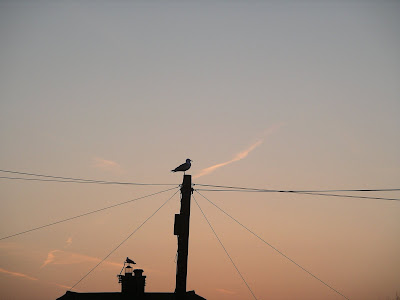 For more photos of skies around the world click here.
Posted by Strawberry Jam Anne at 08:31 14 comments: