As you know, until a short while ago I have not been posting anything recently.  We have had a busy year so far but more of that at a later time.  What I would like to tell you about now really began back in late November 2012.

One morning, about the third week in November my husband received in the post an official looking letter.  Now these letters are not completely unfamiliar because he has, for the past 25-30 years, been very much involved in tourism and has had on occasions had correspondence with our local MP.
So he opened the letter and just stared at it, saying "I don't believe it".  It was a communication from the Prime Minister's office informing him that he had been selected as a recipient for an MBE (for services to tourism in Somerset) in H M Queen's New Year Honours.  If he accepted the honour he was to reply immediately but was requested to say nothing at all until it was announced in the London press on 29 December.  He would hear nothing further until he was sent the date for his investiture.

He was delighted to accept, of course, and I was thrilled for him.

We both kept the secret but on the evening of 28 December we rang our 4 children and broke the news, daring them to say anything at all to anyone else, particularly on Facebook, until the following day.   They were all thrilled too.

So the news broke and Bob received countless congratulatory messages but also contacted the investiture office to inform them that we would be away for most of the first 3 months of 2013.  He was duly sent the date of 7 June, to attend Buckingham Palace.  We had 2 months to prepare.  He was allowed 3 guests so for many and various reason he chose our daughter who lives in Stratford on Avon and a colleague of 35 years who has always been a staunch supporter of what my husband has tried to achieve.  And me.

Daughter and I had fun shopping for our outfits and a hat each!  Husband decided to hire a morning suit but stopped short of a top hat.

We made our way to London the day before and were excited to see that the Royal Standard was flying over the Palace indicating that HM Queen was in residence but the following morning the news told us that in fact Her Majesty would be visiting the BBC that day so we were doubtful that we would actually see her.   In fact it HRH Prince Charles who carried out the investitures that day (97 in total).

We arrived at the Palace in due time and showed our invitations and were able to walk through the gates then through the archway that is situated under that famous balcony.  Once inside the Palace we were impressed by the splendour of it all including the horseguards who were stood to attention at various points inside.  We then had to part company with Bob and took our seats in the ballroom (the room where the royal wedding photos are staged).  Bob and the other recipients were in a room to our left receiving instructions for when their turn came.

It was marvellous.  Just before 11 am 5 Yeomen of the Guard marched in and took up their positions on the dais.  Then the National Anthem was played and the Prince of Wales entered with his entourage and the business began.  It was timed to perfection, each participant being presented and the Prince having a few words with each.  He appeared to be warm and welcoming and very friendly.  Finally Bob's turn and I have to tell you that I was immensely proud.  It was all over by 12.15 pm, we met up with Bob and then made our way to a celebratory lunch at a restaurant overlooking Tower Bridge.

There is so much more I could tell you but have tried to keep it relatively concise.  However, below is a photo of him with his medal, and one of the Yeomen preparing to get into their transport back to the Tower! 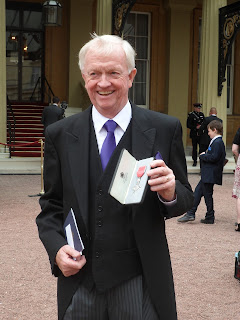 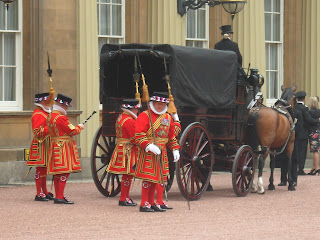 It is more than 5 months since my last post but I have missed it and was determined to find the time to start blogging again.  Father's Day is as good a time as any to make a start.

Although my own dear Dad is no longer with us I do have 4 men in my life that deserve to be greeted.  Obviously my husband comes first.  He is such a support to me and is a good hearted and caring man, to everyone.  My own son, who this time last year was forced to separate from his wife and family.  No details on that for obvious reasons, except to say that he was heartbroken.  A year on he is in a much better place, sees his 3 children every weekend and is enjoying life again.   My step son in law who was so welcoming when husband and I visited the family in New Zealand in January (more of which in a later post).  Last but not least, my stepson who is a full time fireman.  Also a caring man he lives with his wife and 2 daughter so is a bit outnumbered and takes himself fishing to relax and brings us fresh fish from time to time.  Happy Father's Day to all of them.