More of Katie again this week -

with her friend, Buster - I soon learned to keep the camera handy for moments like these. 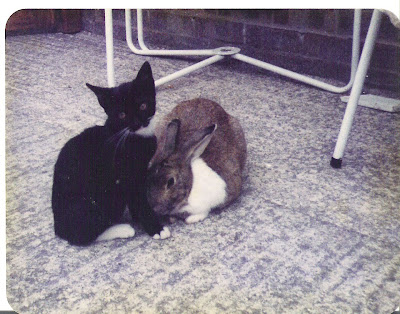 I came down one morning to find she had been rummaging through my knitting bag! - she had very long whiskers for such a slim cat and had long legs as well. 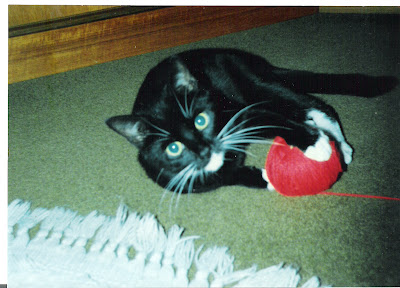 Like a lot of cats she loved to play and hide in boxes - (this while we were trying to pack) - there was always fun to be had and time to play. 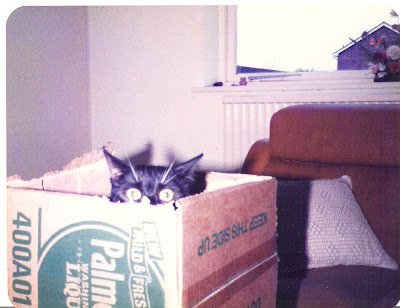 Thanks to Gattina for hosting this lovely, lovely meme and if you would like to see more cats on Tuesday, please click here.
Posted by Strawberry Jam Anne at 10:03 15 comments:

As some of you may know, one of our sons and his family have been living in Australia for the past 7 years, returning to the UK in March this year. When they emigrated in 2004 they had a boy of 3 and a baby girl of 10 months. It was very hard to say goodbye to them and I can still remember the dull ache I felt inside. However, I was lucky enough to be able to visit them several times during the 7 year period they were there and thus retained the bond I had with my grandson and got to know my grand-daughter as well. When they had their third child, another boy, in September 2008, I travelled with my mother to meet the newest member of our family. The last time husband and I visited Australia was in December 2009 and so at our reunion in the UK in March, two and a half year old Matthew half-remembered us.

They are now getting to know their cousins and get on together well. We have 2 grand-daughters living just down the road from us so see them from time to time, although they are teenagers now and naturally have their various activities which take up quite a lot of their spare time, but they do come to stay occasionally as and when the need arises.

Last year our youngest grand-daughter came to stay with us for a few days during the summer holidays and was keen to repeat it this year. So we asked if our two eldest grandchildren from Australia would like to come as well. It was agreed and the dates confirmed. About 3 weeks ago we picked them up from home in Worcester on a Friday morning and were back at home in Somerset by lunchtime. We returned them back to their parents at 5 pm on the following Monday.

So for 3 days and 3 nights we were in sole charge of grandson who will be 11 in September and 2 grand-daughters ages 7 and 8. We are 30 years out of practice and we were exhausted but we loved it. They were as good as gold and I think we all had fun. The weather could have been kinder but we had a list of possible things to do with wet weather contingencies. It worked a treat and when we delivered them home husband told them, in front of their parents, that their behaviour had been exemplary and that they could come visit again. They said they had had a good time too and I think they meant it.

We drove home and when we walked back indoors at about 7pm it felt so quiet and I felt again that old, familiar ache. A friend happened to ring to find out how we had got on - "I've been thinking of you" she said. I told her and explained the empty feeling. "I know exactly what you mean" she said. "Sit down and have a glass of wine and you will feel better by 9 o'clock" and do you know, she was right - well almost!
Posted by Strawberry Jam Anne at 12:11 15 comments:

This is my first time at Cats on Tuesday and I would like to introduce you to Katie. We collected her when she was 7 weeks old and she was with us for 12 years. These photos were taken very early on as you can see.

In my son's pocket 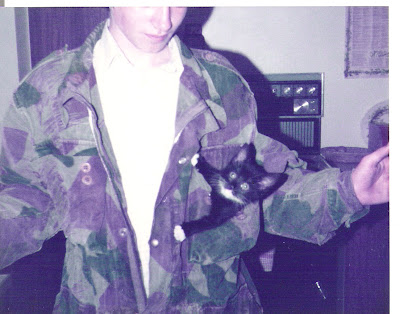 With Buster our rabbit - they soon became firm friends and often played together. 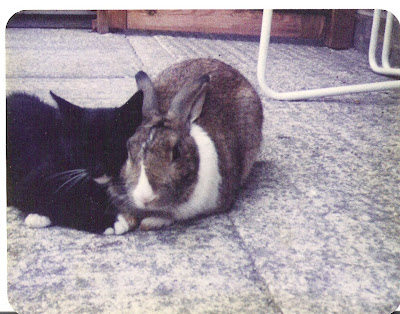 Katie was a real character, very loving, full of fun and rarely still. I loved her very much. In following weeks I will show you photos of all my beloved cats. I shared my life with them for the best part of 60 years but, sadly, now live without them, for many reasons. But I do miss them. Thanks to Gattina for hosting this lovely, lovely meme and if you would like to see more cats on Tuesday, please click here.
Posted by Strawberry Jam Anne at 09:20 8 comments:

Well not quite but very close! In the past 2 months husband and I have taken a couple of breaks. In June we went on a coach tour of Scotland. H had never before visited "north of the border" and the last time for me had been some 45+ years ago. Recent times have seen us jetting off on long-haul flights to visit our children in Australia and New Zealand. Well now the "Australians" are back living in the UK and although our NZ family are staying put and therefore another trip there will take place, it is not on the cards at the moment. So in mid June we boarded a coach and were taken north, as far as Inverness. 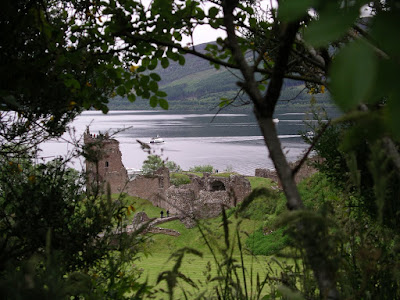 but not "Nessie", this was the closest we got! 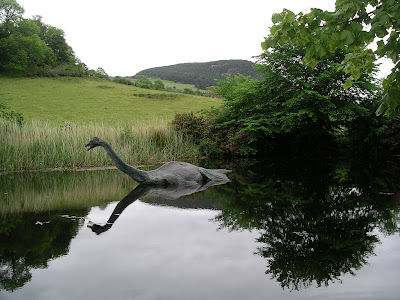 The Caledonian Canal is another famous Scottish waterway and we stopped here at Neptunes Staircase and saw a set of 8 locks designed to raise vessels to 70 feet above sea level and thus negotiate the surrounding area. There are 29 locks in total on the canal. 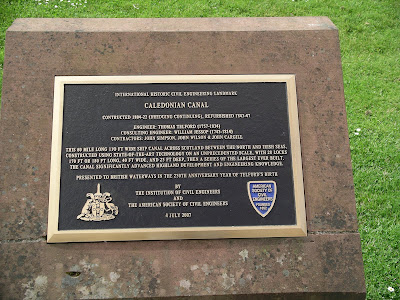 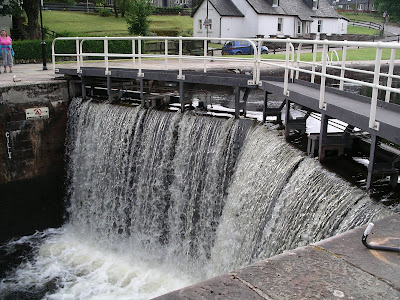 We drove through the wonderfully atmospheric Glen Coe, site of the historic massacre of the MacDonalds by the Campbells. 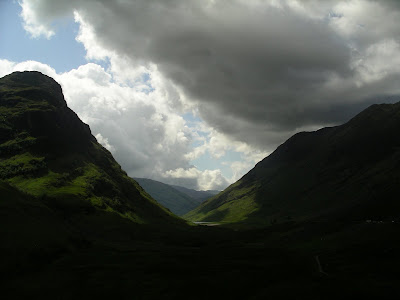 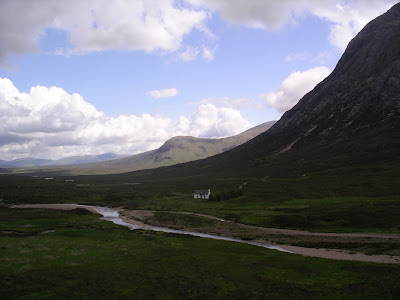 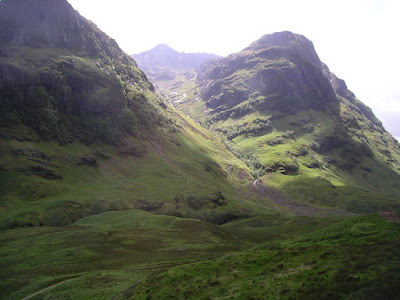 This monument is to the Commandos who died during the 2nd World War. The surrounding area was their training ground.

We stayed in Fort William which is very close to Ben Nevis (the highest mountain in the Bristish Isles) and from there had a train ride to Mallaig which is said to be one of the most scenic in the world. It was certainly beautiful and the morning was perfect with sunshine, blue skies and hardly a breeze so the reflections in the lochs were very sharp and clear. I didn't take many photos as I wanted to concentrate on the views and after all we were rattling along in a train. 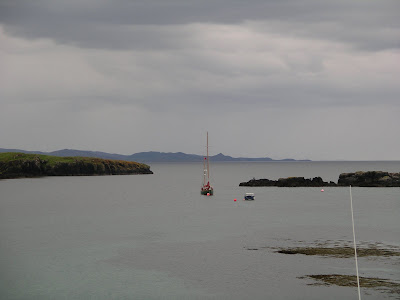 Unfortunately we had only a brief stay in Edinburgh but did manage a couple of shots of the Castle. 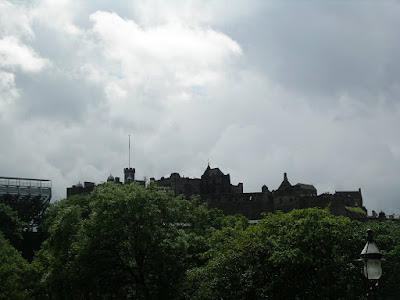 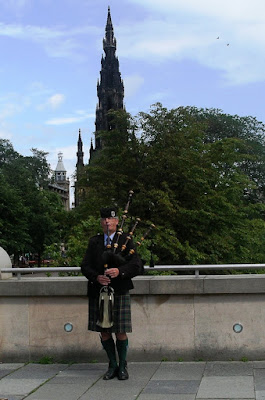 On the way home we went to Gretna Green on the border of England and Scotland, which has seen so many runaway marriages. 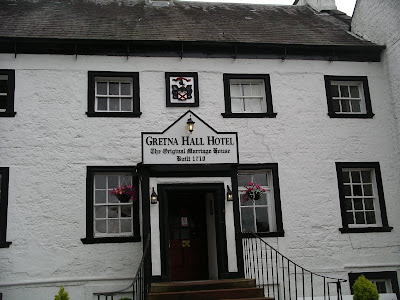 Last week we travelled down to see some friends who have lived in Cornwall for the past 5 years. We went via the Tamar Bridge. 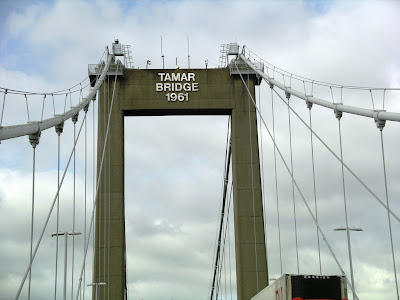 We actually stayed in the village of St Keverne, on the Lizard which is the southernmost part of the British Isles. The hotel we stayed in "The Three Tuns" is reputed to have a ghost! Fortunately we didn't see anything untoward.

Lands End is a short drive away and we travelled over there one day and had lunch in a hotel overlooking St Ives. 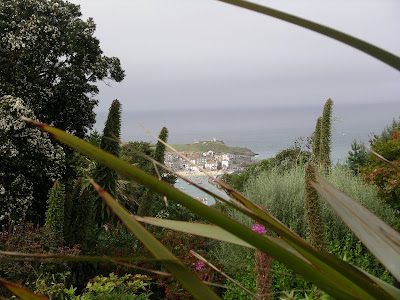 A very pleasant few days catching up with our friends and we promised to do it again before too long. We realised on our way home that we had almost travelled the length of the British Isles during the past few weeks, but not quite!