Here we are again at the end of another month. March has been a kinder month for me and my family than February was this year. To begin with the weather has been marvellous. Plenty of warm sunny days with few of the March winds we would normally expect and very little rain. We have even turned off our central heating although I realise that we may have to switch it back on again before Spring is well and truly over. We shall see!

The month has provided a few celebrations. To begin with there were two birthdays - my son was 43 on 4th March and my mother 89 on 9th March. Son was still in Australia for his birthday but returned to the UK on the 11th with his wife and three children. They are going to be staying with DIL's parents in Worcester for a few weeks and are looking to settle there. So a few days after their return we travelled to see them and had a bit of a family get together to welcome them home. This coming weekend they will visit us and we are planning another party!

It was lovely to see them all again and to know that they are now living so much closer. They were in Australia for 7 years but I think the longing for "home" became too much, especially for my DIL, who really and truthfully didn't really want to go in the first place. They agreed at the time that they would give it a few years and if one of them really wanted to return to UK then they would. So they are here and I just hope that all goes well for them now. The two eldest children are already in school and seem to be settling well. Jacob (aged 10) has a teacher who comes from Australia!

My mother isn't too well at the moment and is due for a check up next week. I actually called her GP to see her today but he says there is nothing wrong. I don't agree and feel that it could well be old age that is now taking its toll. We will get next week over and then I shall take it a step further to try to discover what is wrong and how to help her. My daughter has had a bout of shingles and immediately followed that up with a really heavy cold but is now well on the road to recovery and should get back to work next week.

We have had lunches with friends which is ALWAYS a pleasure. Some have been impromptu and others planned, both out and at home. All great fun, with much reminiscing and laughter.

I managed to finish my bedroom chair covers and although they are not perfect I am very pleased with the result and the chair now looks so much nicer than it did. 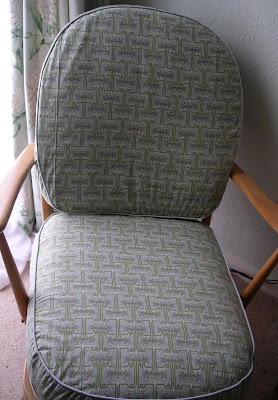 My next project will be to re-line a favourite winter coat, with help, of course!

Finally a picture of Springtime in Somerset. 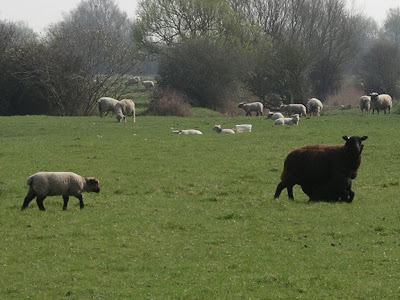 I have really been finding it difficult to do any posts at all lately. I have managed to look in at some of your blogs from time, in an attempt to keep up to date with your comings and goings but even that has been spasmodic. I have decided to take a leaf out of Kitty's book at Kitty's Bloggy Bits , (having asked her if she would mind first)and do a monthly round up. Kitty does her round up on the last day of the relevant month and here we are already at 2 March. However, my February was extended by one day this year because I have a friend whose birthday falls on 29th February so we were out for her birthday lunch yesterday. I had planned that I would write about things as they occurred but didn't even get around to that so here is a potted version of my February 2011.

The month actually began on a sad note as my daughter had to have her beloved puss cat put to sleep. A pretty cat, she was beautifully marked and her paws were black which I have never seen on any other cat. She was quite temperamental, really a cat with attitude. Ian (don't ask!) was 18 years old and had been ailing and failing since last summer, being kept going by steroid injections every few weeks. "You will know when it is time" the vet had said and on 2 February I received an early morning telephone call from my heartbroken daughter to say that the time had indeed come. She arranged for the vet to visit to the house rather than cause her pet any more distress by taking her to the surgery. There were several phone calls throughout the day between us with me trying to console and support her from 100 miles away and trying not to cry myself. However the deed was done and Ian is now sleeping peacefully, in the sunshine, under the bird bath in the garden she loved so much. I shall miss her when I visit as she and I used to have some fun times playing with a ping pong ball. I will tell you more about her one day in a separate post.

Ian playing (when she was still a kitten) 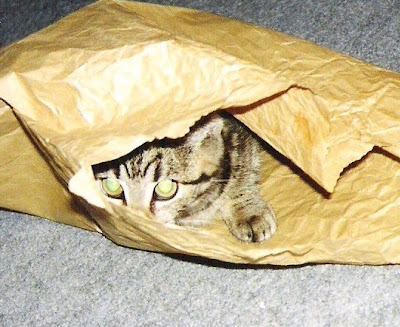 Ian relaxing (about 6 months ago) 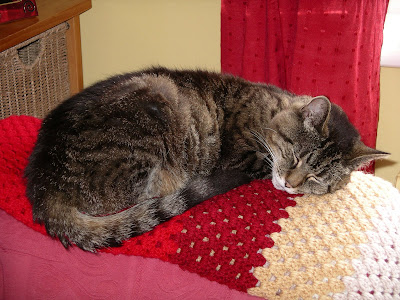 The weather during February wasn't that cold but we have had mostly grey days, only seeing the sun shine on a few occasions. However the spring flowers began to show their colours and the birds have been singing for a few weeks now.

I returned to my sewing classes at the start of the month and I am now making some new covers for a bedroom chair. I will post a photo when it is complete. The owners of the shop where the classes are held (upstairs, away from the shop) have just won a "Stitching Retailer of the Year" award (for the third year) so we are all very thrilled for them. They definitely deserve it as their shop is so well stocked and the staff are always so pleasant and helpful.

I began sorting through old photographs which was great fun. We have hundreds of them to be looked through and decisions made as to which we will keep and which can be handed over to our children to peruse and which we can just discard. We love looking at those from our childhood and once I have been through them all I may post some for you to see.

Husband went away for a week to promote this area for tourism, something he has done for years and a subject very close to his heart. Whilst he was gone our eldest (14 years old) grandaughter came to stay for 4 days as her parents were also away and that was a new experience (in a good way). Well not new really as I have obviously lived with teenagers before but not for many years, and it is all so different these days! However, we both survived!

The brilliant news of my month is that my son and his wife and family (in Australia) have sold their house and have their return to UK flights booked for later this month. I last saw them in December 2009 so I am very excited about seeing them again soon and to know that they will only be about 100 miles away instead of 10,000.

So that is it, my potted version of February but I cannot end before saying just how touched I was by your comments on my previous post, about my late friend. They were so uplifting and I thank each and everyone of you.
Posted by Strawberry Jam Anne at 18:59 14 comments: