Thinking back to the start of 2009, I remember feeling a bit anxious about what the year might hold for us (me and my family). I looked back to 4 January and found I had written "I have to admit to a certain amount of trepidation when I look forward to the year ahead, not a feeling I usually experience".

For my son in Australia it has been his "annus horribilus". He has had health and sight problems, was out of work for a while which, in turn, obviously, caused financial concerns and his beloved dog died. On top of that, his wife has said that she no longer wants to stay in Australia, wishing to come back to UK to live and be near her family. I kept in close touch, either by telephone or via the web-cam but it was apparent that he was getting lower and lower in spirits. So what to do? Stay here and unpack, settle in and worry about how the family were doing, so far away, or go and see them.

We had had a difficult year for various reasons including the house sale and purchase of our new home and all that that entailed and I just wanted to be able to move in and get unpacked and prepare for Christmas. We had planned that in January 2010 we would travel to Australia and New Zealand, take our time over it and visit both families there. I didn't want to go to Australia before that but I am so pleased that we took the decision that we did. I left on 8 November and booked a flight for OH to follow me 2 weeks later. My son was very low and at times quite emotional when I arrived but we talked at some length over the first two weeks and I persuaded him to at least go and talk to his doctor about he was feeling. By the time OH arrived he was 100% in better spirits and we spent time together most evenings.

It was lovely to see our grandchildren of course, they are all beautiful. Our eldest grandson is 9 and a lovely natured boy, full of smiles. Our 6 year old grandaughter is more outgoing and very competative. The youngest, 15 month old Matthew is a real handful. Into everything and very outgoing and confident. Also full of smiles.

We enjoyed our time with them and left them preparing for Christmas in much better spirits than when we got there. We didn't do anything except listen and just "be there for them". The telephone is marvellous but there are times when it just won't do. I suppose we could have stayed for Christmas but we had already committed ourselves to family back here and anyway we really did want to get back to our new home.

I think it almost certain that they will be coming back to the UK and for good. Son is certainly viewing it from a more positive stance now although we feel that they would do better to stay put or, at the very least, come for a holiday before final decisions are made. Never thought I would actually say that, heartbroken as I was when they first went there.

I'm very lucky in that I have few health problems but back in September began experiencing dizzy spells and occasionally thought I might black out. A bit disconcerting so I booked to have my blood pressure checked, but through some sort of communication problem it didn't happen so I just went off to Australia thinking I would deal with it on my return. Had another dizzy spell and "black out" on the flight over and again a few days later so then I went to see a doctor. It seems that my BP is too high so had to begin taking the necessary medication and saw my own GP on my return. BP is coming down now and I feel fine again, no more dizziness or blackness!

So we are settling into our new home. We love it and are looking forward to our first Christmas here. The tree is decorated with "the shepherd" (made by my son at school when he was about 5 years old) stood beneath it, as usual - see below. 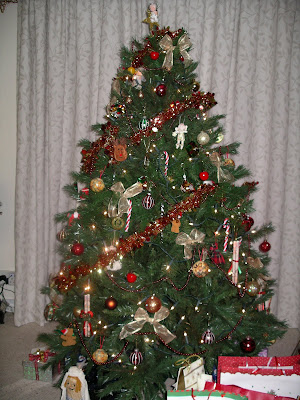 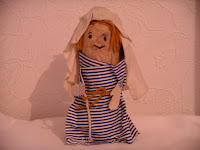 Our daughter and grandaughter are coming down from Sratford on Avon to be with us and on Christmas Day my mother and OH's aunt and uncle will join us. Other family members will pop in on "the day" and we will catch up with friends during the Christmas Season.

I am trying to get up to date with blogging friends and will do that over the next week or so. Having had our old computer "die" on us I am still trying to get to grips with a new system. I have only JUST worked out how to put photographs on my posts but it may be a while before I can show you the view from our windows or take part in any of the memes. I have managed a Christmas photo though.

Thank you so much to all of you who have left kind and supportive comments, if I haven't already been in to see you, I will do so in the near future.

In the meantime I would like to wish you all a very happy and peaceful Christmas and sincerely hope that 2010 will be a good year for you.
Posted by Strawberry Jam Anne at 20:30 14 comments:


I have missed blogging and would have liked to get straight back into it but with Christmas just a week away and still having so much to do to settle into our new home (left undone due to my hasty departure for Australia), it has been a question of priorities. However, this evening I couldn't resist a peek and anyway felt it was time I made contact again. I really appreciate the kind and supportive comments made by my blogging friends after my last post.

I won't go into too much detail now, just wanted to say hello to you all and will update you in a few days, certainly before Christmas.

I expect most of you will be in the throes of preparing for the coming festivities but I'm looking forward to reading back a bit to see how you all are. I do hope that I will be in more regular contact once we get into 2010.
Posted by Strawberry Jam Anne at 22:37 14 comments: